The practice of making Mass offerings dates back to the early Church when the faithful brought bread and wine for the Mass and other gifts in support of the priests and the poor. Nowadays a monetary Mass offering called a Mass stipend is a way for the faithful to include a particular intention in the celebration of the Holy Eucharist. This offering unites the donor closely with the life and mission of the Church – the Body of Christ – as the offering becomes a form of material support to the Church’s ministers and their pastoral activities.

The Holy Mass must never be an occasion for ‘buying and selling’ or ‘making money’, nor should there be even the slightest appearance of making a profit from Mass offerings. The Holy Mass has inestimable value, it is Christ´s sacrifice for the life of the world and so the Mass is ‘unpayable’. The offering given for the celebration of a Mass is an expression of the donor’s desire to share more intimately in the fruits of the Mass. The material gift not only provides the sustenance to the priest, it also expresses the donor’s gift of self to God.

In most of the countries of the world, priests do not receive any or very little regular financial support. The economic situation does not allow the faithful to financially support their priest. Therefore, through Mass offerings ACN wants to provide a basic existential help to priests worldwide and so enable them to undertake their pastoral service.

How to present a request of Mass stipends

The request for Mass stipends can be submitted to ACN only by the ordinary (diocesan bishop or religious superior) on behalf of the priests working under his jurisdiction. ACN does not accept requests for Mass stipends from individual priests. Preferably the application for the Mass stipend should be done only once a year.

If the request is approved, the ordinary is bound to assure, that the accepted Mass stipends are administrated, distributed to the single priests and applied in celebration of the Holy Mass according to can. 945-958 CIC. Particularly he has to assure, that for each Mass offering received, a separate Mass is to be celebrated for the individual intention of the donor (ad intentionem dantis)(cf. can. 948 CIC[1]). Every priest, who celebrates Mass in the intentions of the ACN donors, should receive, if not agreed differently with the ordinary, the whole amount of the Mass stipend forwarded to the ordinary by ACN. It is not permitted to combine several Mass offerings received from ACN or to combine these with other Mass offerings and to satisfy them with a single Mass, celebrated according to what is called a ‘collective’ intention. Masses for the accepted Mass offerings are to be celebrated within a period of one year (cf. can. 953 CIC[2]).

According to can. 717 CCEO[4], if the priests of the Oriental Churches, accept offerings for the Divine Liturgy from the Christian faithful of another Churchsuiiuris(in the case of ACN, Roman-Catholic Church of Latin Rite), they are bound by the grave obligation to observe the norms of that Church (CIC). 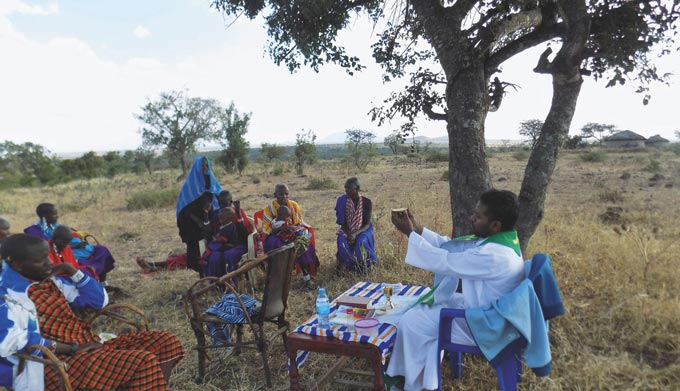 Following information is to be provided in an application for Mass stipends:

Important! In view of more stringent reporting, safeguarding and data protection requirements in the world today and out of a duty to show our benefactors how their donations have been used, we are introducing a Project Agreement and a Data Protection form, which must be signed and returned to us before any funds can be released.

1. Can.948 Separate Masses are to be applied for the intentions of those for whom a single offering, although small, has been given and accepted.

2. Can.953 No one is permitted to accept more offerings for Masses to be applied by himself than he can satisfy within a year.

4. Can. 717 If they accept offerings for the Divine Liturgy from the Christian faithful of another Church sui iuris, priests are bound by the grave obligation of observing the norms of that Church, unless it is established otherwise by the donor.