Menu
Menu
Home > Latest News > Niger: Surprise And Joy With A New Video Of A Priest Abducted In 2018
Donate
Menu

Father Walter Maccalli expresses his “surprise” and “joy” for the video showing his brother, Father Pier Luigi Maccalli, who was abducted in Niger in 2018

“It’s great news, and we are delighted and hopeful that everything may turn out well”, he said, in a brief recorded statement sent to the Portuguese office of the international Catholic pastoral charity and pontifical foundation ACN, after news came through of a recent video showing his brother, who was abducted in September 2018 in the parish of Bomoanga, in Niger, close to the frontier with Burkina Faso. 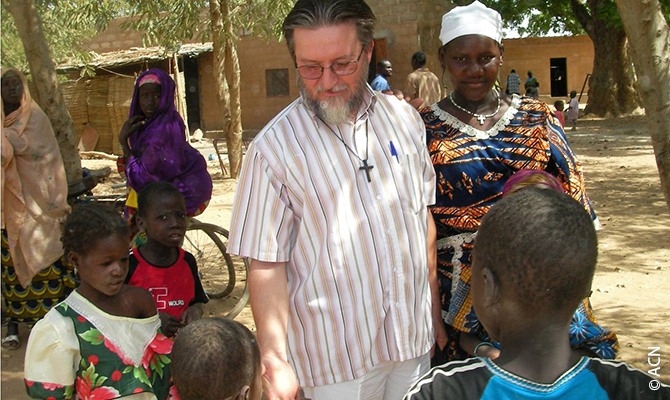 This was the first reaction from a member of Father Pier Luigi Maccalli’s family, since his whereabouts have been completely unknown since then. In fact, since the day of his abduction there has been no news whatsoever about his fate. Now, however, at the beginning of this week, a video has been released in which he is seen, looking tired, alongside another abducted prisoner, who has been identified as the Italian, Nicola Ciacco.

According to the periodical Aïr Info, which revealed the news and which has published a photo taken from the video, this has been “authenticated” and is believed to have been recorded on 24 March this year.

The extremely short video, of barely 23 seconds, according to the periodical, appears to have been recorded by his abductors as “proof of life”, and may point ultimately to the possibility of negotiations for the liberation of this missionary, who is 59 years old and has spent more than a decade serving the Church on African soil.

For his brother Walter Maccalli, who is likewise a missionary in Africa, currently working in Foya, Libéria, it was “a great surprise” to see this video since he had “never expected to get news of this kind about his brother”.  After all, as he says in his message to ACN, “a great deal of time has passed without knowing anything”.

Assuming that this could be a matter of a demonstration by the abductors, proving that his brother is still alive with a view to eventual negotiations, Father Walter acknowledges that “this is a first step” and that we will now have to wait for more information. “We will now have to wait to see how things turn out. Let us continue to pray and hope that we may finally even be able to meet in person and truly live that joy that we have been hoping for for such a long, long time. Thank you!”